The February Cass Freight Index has been released and it continues to support and is right in line with what we have been predicting here at 10x Logistics Experts.  The market is soft and continues to bounce around the bottom which is holding rates flat for the data bases procurement experts.  The market continues to predict a 2% price increase at recent investor conferences this is what the transportation companies are planning for. 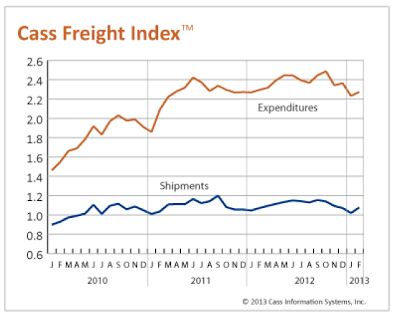 There are two interesting developments which are mentioned in the press release for this data which I believe should be mentioned (and which we have discussed for months here at 10xLE®).

First, we are seeing a bit of a divergence in truck ton miles versus expenditures which, as is stated by Ms. Wilson is due to "...Most likely...the average weight of a shipment rose during the period".  One of our counter balances we have discussed to the driver shortage is the "miniaturization" of goods which includes packaging.  You can move the same freight in smaller packs and thereby reduce the need for trucks.

Second, the increase in the type of activity in the economy which is driving what appears to be a rather robust economy is not the type of activity which translates to freight and transportation.  As I have said for many months, the magical "3%" GDP number is not the same 3% number from 20 years ago.  It does not translate into a lot of freight.  Google and Facebook don't move a lot of goods (physically that is).

Finally, in the report it is discussed the GDP prediction is still for a "Low, probably less than 3%" GDP number.  I am far more in the camp of a 2% GDP number with 2.5% being on the high side.

The bottom line for transportation procurement professionals:  If you had followed the 10xLE® procurement model and held your position you would not have paid "insurance" against capacity shortfall premiums last year as it has yet to materialize.

If you did buy into the hype and pay the premiums my recommendation is you try to identify the amount and get it stripped from your rates.  We still hold, despite promises, you will not get "benefit" later in the cycle for paying premiums now.