Mike Welch - A Legend Passes On 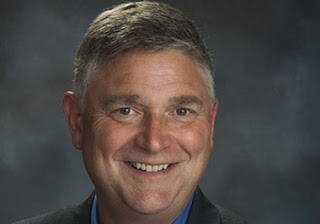 It took me a few days to even think about a world without Mike Welch.  Mike was truly a special man.  He was special not in a flashy way but special in a very specific way; he made everyone's life a little bit better.  He was a friend to me, a business mentor to me, a supplier in some instances and he was a model of community involvement for the community my family lived in for so many years.  He made our life better.

I feel a need to tell the story of how Mike and I met and started working together.  In 2004 I was the General Manager of a the Ford Service Parts Business working for Schneider Logistics (SLI).  Ford was building out their Daily Parts Advantage service model and asked SLI to somewhat replicate what we were already doing for GMSPO.  As the GM I had to find dedicated carriers to make all the deliveries nationwide to almost 5K dealers and we were having trouble finding a carrier in Evansville, Indiana.

Luckily, I had an acquaintance who used to sell truck parts but now owned a company called Segmentz.  They were a very small LTL company and at the time Ford wanted to really look at costs and so we took a chance on this small, unknown and very inexperienced company.  Right after we contracted with them they purchased Express-1 from Mike Welch.  This acquisition is what made Express-1 a public company and it turns out the only real profitable part of the merger / acquisition was the part we contracted with for the Ford Service Parts.

This caused Mike to become President of the combined company and they shed just about everything that was Segmentz.  This is how I met Mike.  I was living in Novi, MI and Green Bay, WI at the time.

Fast forward to 2005 and I had decided to leave SLI and went to Whirlpool in St. Joe Michigan.  One morning I went to get my haircut and who was in the barber chair but Mike Welch!  I was shocked as I really had no idea they were based in Buchanan.  We talked a lot and it turns out Mike was deeply involved in my son's school and he was a great expedite provider to Whirlpool.  This meant I was able to rekindle both our professional work and our personal relationship.   So, what did I learn from Mike:


So, we in the logistics and supply chain world lost a great one.  While the company (Express-1) was not as big, I would put Mike up with Don Schneider, J.B. Hunt and all the greats of our industry.

Mike, you will be missed by all... God Bless you and your family and I hope to see you again...

Read about the history in Mike's own words at this Interview by the Wall Street Journal.
Posted by logisticsexpert at 9:39 AM No comments: