I have read two major books recently on the economy - one old and one new. Both appear to be seminal books on what drives economic booms, busts and panics.  The two books are:  1) The Makers and The Takers: The Rise of Finance and The Fall of American Business by Rana Foroohar. 2) Manias, Panics and Crashes: A History of Financial Crises by Robert Z. Aliber.

The theme of both books is excess debt plays a huge role in the build up to any recession (or worse, depression).  The cycle goes something like this:


This has been the case for hundreds of years (despite people wanting to go back to the "good old days",  hard depressions are less harsh now and certainly less frequent).  As we see freight volumes going down and with that, freight rates going down, I have to ask, are we starting to see this cycle in its later stages?  Certainly, we are at the tail end of an expansion but what does the debt data tell us?

In this and subsequent editions of Macroeconomic Monday® I am going to attempt to explain where I think we are.  Today, we will look at three topics:  The overall debt (Household) in the nation, the makeup of that debt and finally the quality of auto loans.

The graph the the left depicts the issue at hand.  As you can see from this chart our overall household debt is almost at pre-recession levels. Two other key points are clear from this chart:
Mortgage debt is still inflated and the very interesting part of this chart is the growth of auto loans. The key part to this, as explained in the graph below, is more and more auto loans are made to the sub-prime sector of the economy. 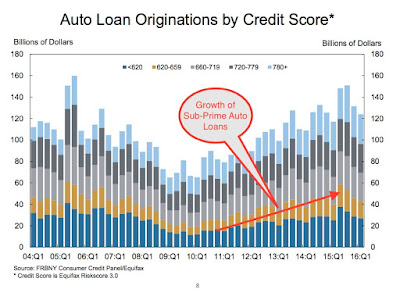 This graph shows more detail on the auto sub-prime loans (When you see your friend get that new BMW, you have to wonder where the money came from).  You can see that auto sub-prime really telegraphed the previous recession and then people clamped down on their borrowing to right their personal balance sheets.

However, really since about 2011 this has changed and the sub-prime borrowing started taking off again. This was almost fully due to automobile companies needing to keep the "post recession party" going.

So, our first lesson is pretty clear, and stark.  Personal debt is growing and total debt is almost at the pre-recession levels. For one of the biggest and riskiest categories (auto loans), sub-prime debt is increasing. Finally, student debt, which stops or delays household formation, is clearly at unsustainable levels.

Following our guidance in the two books I mentioned above, this is the "brake" on the economy which never lets the flywheel turn on its own.  It is also why markets go into turmoil every time Janet Yellen even remotely mentions increasing interest rates. This brake is why freight volumes are down, we have over capacity in transportation and rates are starting to plummet.  If people do not buy, companies do not make and therefore freight capacity exceeds volumes and rates go down. It is that simple.

So, the next time someone says to you "things will get better next year", remember the debt story. They cannot get better when more and more money is going to pay interest on debt incurred for items already purchased.  And, of course, this is why you are seeing negative interest rates as central banks realize that is the only way to fight this.  But, more on that next time.

Posted by logisticsexpert at 2:22 AM No comments:

I have advocated over and over that the idea of getting better rates because you are a "favored" or "preferred" shipper is a red herring.  The idea that a trucking company will take less in profit because you are preferred just does not make sense.

In the environment of rate reductions and over capacity I am sure shippers are starting to hear the same old mantra from the trucking companies:  "Stick with us and pay higher than market rates.  Once the "worm turns" we will stick with you".  This is the logic. Yet by all accounts, even the transportation executives believe transportation is a commodity play.  Less capacity and more demand = prices go up.  More capacity and less demand = prices go down.  That simple.

I had been somewhat a lonesome person in this argument until C.H. Robinson, along with Iowa State University, attempted to quantify this with a white paper entitled:  Do "Favored Shippers" Really Receive Better Pricing and Service.  Let me cut to the chase and let you know the answer is NO.  Here is a quote:


"Carriers cite many attributes that may result in "shipper of choice" status.  Research shows that keeping the driver moving and generating income is more important to these carriers than keeping a shipper as a customer".

The bottom line is that dwell time of the driver is the overriding factor to determine if you will get best price or not.  And really, it is not even the driver rather it is the trucking company asset (Truck and trailer) they truly care about.

My advice is the same now (and even strengthened) as it always has been.  Take what is yours in terms of rates because the trucking company will take what is theirs when the environment changes. Then, of course, do the right thing and keep the trucks moving.
Posted by logisticsexpert at 8:18 AM No comments:

Predictions Coming True - Inventory Adjustment Under Way and Rates are Down

A special edition of Marcoeconomic Monday today!  The results are in and they are really showing a slowing economy (GDP adjustments have been lowered), inventory adjustments being made and therefore truckload and intermodal rates going down.

I have shown throughout this year that the inventory to sales ratio was telling me that inventory was growing at an unsustainable rate and sooner or later a correction will come.  The Wall Street Journal recently acknowledged this with an article called: Inventory Pullback a Drag on Logistics Spending. As companies have realized the need to adjust inventory levels, the need for more product decreases and therefore the need for transportation goes down.  Result?  A capacity / demand imbalance that supports lower rates.

The newest CASS readings show this is coming out in the industry rate structure.  The truckload index fell 1.2% in May after reductions in April and March.  The intermodal index reduced by 2% and Cass has acknowledged this is 17 consecutive months of YoY declines.

Bottom line:  Rates are going down, the economy continues to sputter and another year of "this is the year" seems to be fading away.
Posted by logisticsexpert at 10:46 PM No comments:

An interesting development over the last few weeks which I needed to digest was the entrance of Schneider National into the Final Mile foray.  My readers know I have followed the growth of final mile for many years (See where I showed XPO's acquisition in 2013 was "game over").  I was an "early adopter" of how important this segment was to the overall logistics network moving products to customers.  One thing we know is Schneider cannot be seen as an "early adopter" of anything - they are very disciplined and careful in investment.  So, this is why their entrance is so important.

The service is called Final Mile+ (JB Hunt has had Final Mile Services for many years - confusing branding by Schneider) and it appears to be a direct competitor to the XPO story of owning the supply chain from raw materials through manufacturing to retail then to the customer's home.  They acquired both an operating company, Watkins and Shepard, and a technology company, Lodeso.   The key will be whether Schneider is successful at stitching this together to give the customer a seamless view from the beginning to the end.  To this point, few companies have been able to do that and it has been tough for 3PLs to make the case that "one stop shopping" really adds value.

I personally believe the model is getting a bit crowded at the integrator level and very sparse at the operating level.  Remember, all these companies (XPO, Schneider etc.) are really just brokers to a final mile courier service.  It is at the bottom level where the problem exists.  We need more people actually doing the hard work of pick up, delivery and installation.  I don't believe we need more integrators.

JB Hunt Final Mile differentiates itself because, for the vast majority of what they do, they use their own trucks and drivers.  I think that ultimately will be the competitive advantage.  While today it may be cheaper to integrate many couriers, I think in the long run service will be the key element and the way to get that service is to own the assets.
Posted by logisticsexpert at 10:37 PM No comments: