The Logistics of Defending Against Asteroids

A respite from working on how to get a package from point A to point B is to think about the meteor which hit Russia a few weeks ago.  Then think whether it was just pure dumb luck that it did not hit Chicago or are we really safe from this?

Unfortunately, it turns out, it is just pure dumb luck.

Which makes the fact that my fraternity brother from college, Dr. Ed Lu (and space shuttle astronaut),
is working on how to defend the earth from asteroids with his non profit B612 a good thing.  It makes me sleep better at night.

So, for a break, watch this quick Tedx video... You will enjoy it and be fascinated.

Posted by logisticsexpert at 4:31 AM No comments:

Should Cost Modeling Comes to Logistics

I wrote back in January, embedded in another article about why people should do "should cost" modeling prior to negotiating rates.  This has caused me to do a lot more thinking about this topic and after doing some analysis I have come to the realization this is the best way to get to what the true cost of freight should be.

It also eliminates all the emotion, speculation and hype of the industry when you read about capacity constraints, driver shortages and other macro economic issues.  Here are the basics:

This process has been used by direct procurement people for years.  Also, I can assure you this is the process your transportation suppliers are using to decide how much to pay for a truck, trailer or container.  There are different components to measure but the process of "should cost" modeling is exactly the process they follow.  You should not be afraid of it nor should you be ashamed of using it.
Posted by logisticsexpert at 5:26 AM No comments:

Email ThisBlogThis!Share to TwitterShare to FacebookShare to Pinterest
Labels: procurement, should cost, transportation

I will not go into the details here except to say that an "all or nothing" strategy on almost anything does not usually work and this is no exception.  What J.C. Penny is finding is there are some  applications which make sense and some which do not.

The other big learning is technology is moving fast and for some reason this RFID technology has never been able to deliver on its promise.  What people may find is by the time they figure it out, we will be on to the next bigger, more promising and less costly technology.
Posted by logisticsexpert at 6:00 AM No comments: 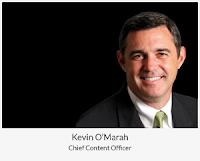 Believe it or not there is a Kevin O'Marah out there (yes, he spells his name differently than I do) and he is in the supply chain field.  Actually, a very accomplished person in this field.  I have been in a few meetings with him and it is fun to see who the moderator really means to call on (hint: it is usually him).

I write this because I wrote a piece over the weekend entitled "A Drone Delivers Your Package". The article discusses how the use of drones may come to package delivery.  Kevin retweeted this and made a reference to an article he wrote just last week about 5 big supply chain trends.  One of these trends was "Robotics takes off".  While he does not reference drones he clearly articulates, rightfully so, that robotics will take off in the logistics field and the trade off of capital versus labor is starting to favor capital in a big way.

Robots, like the drones I mentioned, are becoming incredibly cheaper at the same time they are also becoming more dexterous and mobile.  Here are the 5 predictions:


So, we agree... Great predictions here and they are refreshing because they are bold and not the same old thing just warmed over.  Kevin is someone I have followed from back in his AMR days and I highly encourage you all to do the same.  You can read his writings at his blog: Beyond Supply Chain.

As a side note this is also why people are guarded about all the optimism on the return of manufacturing to the United States.  One has to ask if it is because labor is getting expensive in China relative to labor in the US (when accounting for transportation costs) or is it because robotics have become so good and cheap that you reshore manufacturing in the US to save logistics costs AND you do not employ many people due to automation.

Paul Krugman is even weighing in on this.

Posted by logisticsexpert at 7:21 PM No comments:

Does Logistics Eat Strategy for Lunch?


"Disciples and devotees of "strategic thinking" might find both books humbling. They should. In wartime, logistics eats strategy for lunch"

Given how many companies develop "War rooms" and discuss business using "going to war" metaphors it is fascinating how many of them refuse to learn the importance of logistics and the role logistics has played in the big battles of our time.

I wrote about this in previous installments about the Israeli Defense Forces (IDF).
Posted by logisticsexpert at 12:00 PM No comments:

What a combination of data!  We knew last week was going to be a "big data" week and it sure did not surprise however it certainly was mixed.  It required a view one level down to even try to make sense of what was going on.

First, the market closed over 14,000 for the first time in a long time and for those of you who mistook the economic data over the last 3 years you have really missed a hell of a ride in the stock market.  There are all sorts of reasons why this has happenned and the only thing that matters really is that it did happen and it is now at a frothy level. So, here are the highlights:


Overall, I would say it was a great start to 2013 and the data appears like a fairly decent economy.  The risks which are very clear are:
That is it for now.. Happy February!!
Posted by logisticsexpert at 8:34 AM No comments:

A Drone Delivers Your Package?

Recently, I watched a fascinating show on Nova entitled:  "Rise of the Drones" and as usual, I never expected to get a logistics thought out of the show however, as usual, one develops.  A key scientist (Missy Cummings, former F/18 fighter pilot and now MIT Scientist) being interviewed for the show had actually said "imagine a drone delivering your FEDEX package...".  Now that got me thinking.

First, I had no idea how far the technology for drones has developed in the last 10 years. What they can do and what they are doing is absolutely amazing.  A scary item is they are readily available with a quick search on Amazon you can find many "drones" for less than $1,000 which can do a lot of things (not the least of which from a privacy concern standpoint is take pictures). Here is one I found which I found especially intriguing for less than $750 and it advertises itself as having everything you need to "start aerial filming".  It is called the DJI Phantom Aerial UAV Drone.

So, what is the implication for logistics?  Well, just like what I have been discussion relative to 3D Printing, there is a chance this could revolutionize air freight delivery in the package space.  Think of these key items:


Now, imagine the following scenario:
While I would have said this is far in the future 2 days ago, now that I have watched this show I am not sure how far it is.  Once again, another technology which not only reduces miles driven, reduces demand for drivers and reduces costs but it actually eliminates many of them completely.
Posted by logisticsexpert at 7:22 AM 4 comments: