The major economic news yesterday which, for a short period of time shattered the markets, was the jobs report.  Some key statistics from the Bureau of Labor Statistics (BLS) press release:
However the big number people were concerned with was the level of unemployed people who have dropped out of the labor market.  This number was a whopping 496K.  And of course this brings huge concerns to those of us (logisticians) involved in moving goods to market.  If the market shrinks then there are less goods to move to market - it is that simple.

What this jobs report reinforces are two major headwinds to the economy:
Both of these mean that demand will continue to be stubbornly low and freight volumes will continue to be restrained.  Having said that, what I am most concerned about is the graph below: 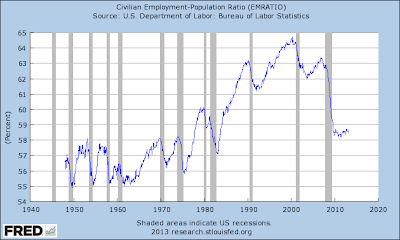 This graph highlights the issue of those who have dropped out of the employment market.  As you can see we are bouncing around a bottom but the number is around the level we were at in the mid 1980's.  Two causes for this and both are a headwind for logistics:
Of these, I am most interested in the second one which could have long term and structural consequences to the economy and to the freight enviornment.  To be clear, this is not a judgement and I am not saying these are freeloaders.  What I am saying is just like companies have now become used to producing more with less, families have now realized they can enjoy life more with less.   Families that felt it was necessary to buy a lot of "things" and thus demanded two incomes have found out one income with a lot less "things" is actually pretty enjoyable.

No matter which way you look at this, we know this is not a good sign for a robust freight recovery.

Posted by logisticsexpert at 8:40 AM