What A Month May Was For Transportation

CASS Freight Systems is out with their monthly Freight Index Report and it shows some very good news for transportation providers (not so good for the shippers).  Some key facts and figures:


But before all the full truckload providers get too excited it is important to call out the role of parcel in this number.  E-Commerce is driving the "train" (sorry for the pun) and a lot of this is essentially Fedex, UPS and other small parcel shippers.  The trend below shows it is really not very exciting for truck load carriers: 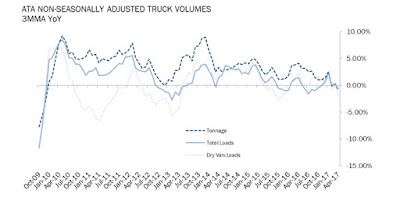 But, the good news is it appears freight is moving which ultimately is very good fro the economy.  I do think it is too early to call an end to the recession the way Cass did but certainly "green shoots" are starting to form.
Posted by logisticsexpert at 7:42 PM No comments: Links to this post

Welcome Back Wal-Mart - We Missed You Over the Last 5 Years.

I hesitated writing about the Amazon purchase of Whole Foods as many have written about it already and much is not yet known about how Jeff Bezos is going to use Whole Foods in the continued growth of his retail empire.  One thing for sure is whatever he does with it will be completely different than most people think.  That is what makes Bezos so brilliant and why no one has been able to beat him.  In some ways, only he knows what he really is doing.

But then I re-read an article I posted in March of 2013 titled, "The Battle for Retail is Really The Battle of Supply Chains".  In this article I opined that the big retailers are all essentially selling the same products, many of which have been or very quickly are commoditized.  This means the real value add of a retailer is in their supply chain.

I also concluded in this article that Wal-Mart should be able to kill Amazon as they already have the bricks and mortars along with the capability of great e-commerce.  Finally, I concluded that due to the age old issue of The Innovators Dilemma which was created by Clayton Christensen in his seminal book of the same name.  Unfortunately, for the last 4 years, and for Wal-Mart,  my prediction came true.

The good news is Wal-Mart, like the sleeping giant, has now been awoken.  With its purchase of Jet.com it admitted it needed great e-commerce and, in the same transaction, admitted it could not do this on its own.  The big behemoth could not innovate so it had to buy.  That is OK as it is at least now on the path to competing with Amazon.

But then a funny thing happened.  Amazon admitted it could not grow bricks and mortars fast enough in the grocery space to compete so it made a bold purchase.  In this purchase, Bezos is essentially admitting he wants to move a little more towards a Wal-Mart model and also showed, in this purchase, the only reason Wal-Mart has not crushed Amazon is due to lack of execution and lack of strategic foresight.

Well, no more.  I believe Wal-Mart truly has awoke and they are starting to adjust their supply chain very quickly to mirror a "be where ever the customer is" retailer.  This means if you are out and need something quickly, you can pull into your Wal-Mart and get it.  If you want to order on line and have it shipped, you can do that.  If you want to avoid shipping charges, you can buy on line and pick it up in the store.  Basically, any configuration of how the consumer wants to interact to get the products she needs, Wal-Mart will be there.  Wal-Mart can ship from DCs or from any of its 4,177 stores of which 3,275 are super centers.  Wow!  Wouldn't Amazon love to have that footprint.

If Wal-Mart executes they have a chance of beating Amazon.  I recently used Wal-Mart on line to buy a UPS for my computer.  It was a great experience, shipped fast and was less expensive than Amazon.

I do think the speciality retailer is dead.  Consumers want the "endless aisle" that Amazon and Wal-Mart provide. They do not want to bounce around to 100 different websites to find what they want.

Wal-Mart can do everything Amazon can do (or they should be able to do it) yet Amazon cannot come close to all the capabilities of a Wal-Mart.  If I were investing, the only stock I would buy in the retail space is Wal-Mart.  I would then go to their shareholders meeting and scream two phrases:  "Wake Up" and "Execute"!

Welcome back Wal-Mart - I missed you!
Posted by logisticsexpert at 8:19 PM No comments: Links to this post

Definitions of Terms Must be as Your Customer Sees It

I am sitting on a plane right now, on the Tarmac, moving nowhere.  This reminds me of another aspect of a truly customer centric supply chain: Define terms as your customer sees them and not for your own internal metrics.

So, the airline app says I have "departed" and in their mind, I am sure I have. But in my mind, I am sitting in a tube, on a tarmac, going nowhere. I, the customer, consider departed to mean I am up in the air and heading to my destination.

Lesson:. Define terms from a customer lens, not from an internal lens. When you do this, you will be on your path to customer centricity.

Posted by logisticsexpert at 11:44 AM No comments: Links to this post

Start with The Customer - Ensure Profitability

Supply chain design is all about two things:  Provide extraordinary customer service through fast and full fulfillment AND do this profitably.  As a company, you will not survive if you cannot do both of these things simultaneously.  Sound simple?  Sure, but then why do so many supply chain professionals only do the back half?

As I work with companies I continue to emphasize that it is important for our supply chain to drive revenue.   Great supply chains (Read: Walmart and Amazon for example) are core to the company's revenue strategy and not just an evil cost to reduce.

But, there is this pesky thing called "profit" that also has to exist to make a world class supply chain complete.  The question really is what do you do first?  My view is you take care of the customer then figure out the cost.  If you are designing supply chains you are in a war with your competitors and the weapons of that war are speed and availability.  Customers, whether they be industrial, commercial or consumer are asking for the same thing:  They want what they want, when they want it, in the right quantity at the right price.  Those who figure all this out will win.  Those who do not will perish.  What are some things you should do now to get on the path to figure this out?  A few ideas below:

This all sounds simple but I can assure you that if you really do this at your company you will be in the top 5%. Most try this but then just revert to the cost equation. The good news is you can win with this model.  In the words of Nike - Just Do It!
Posted by logisticsexpert at 5:00 AM No comments: Links to this post