I have written about this before because I feel the headlines are misleading for those in energy intensive industries such as transportation.  The headlines talk about energy independence and energy dominance and the underlying assumption by most is this will translate into low cost oil.  This could not be further from the case.

We will continue to have high priced oil and the IEA in the same report where they said the US will be the dominant producer of oil also said you can expect oil priced at $125 per barrel (inflation Adjusted).  Oil is a global  commodity and therefore will settle on global prices.  The Wall Street Journal in an article entitled "Don't Expect Lower Oil Prices Even As US Output Surges" quotes the report by saying:


"But oil prices, the IEA said, will continue to rise, hitting $125 per barrel in inflation-adjusted terms — more than $215 per barrel in nominal terms — by 2035. U.S. consumers, the agency makes clear, won’t be shielded from those price increases, even if the country doesn’t import a drop of foreign oil."

The report goes on to say:


"Oil is a global commodity. What matters for prices is total supply and total demand — not where the oil is produced or consumed. That means that even if the U.S. relied only on domestically produced oil, prices would still be dictated by global market forces."

Oil prices are based on global supply and demand and oil is very easily exported.  As soon as there is a big enough price differential where traders can make money in arbitrage they will export the oil. The graph below shows the predictions by the IEA: 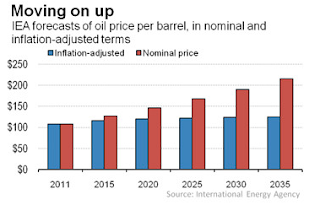 So, the conclusion is clear... The US will be a large oil producer AND you will still be paying $3.00 - $4.00 in adjusted dollars per gallon.
Posted by logisticsexpert at 3:41 AM