Amazon Fresh - Amazon Groceries to a Door Near You

A fascinating discovery occurred the other day on my way to Chicago from Michigan.  As I was driving down I-94 I saw a delivery truck coming the other direction.  It looked a lot like the size / model of a UPS truck except it was somewhat lime green.  On the side of the delivery truck was a logo that said "Amazon Fresh".  It had the distinctive Amazon "arrow" logo and I thought to myself - OK, here it comes. 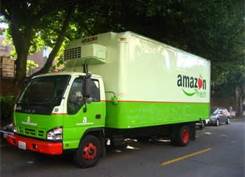 When I arrived at my location I immediately googled Amazon Fresh and was taken to their website and found it fascinating that it said " They offered limited delivery to Seattle neighborhoods" yet I had just seen an Amazon Fresh delivery truck in Southwestern Michigan! I had heard of this even as far back as 2007 and 2008 however I was shocked to see the truck in my area.

Then today Twitter and other news services lit up with the news Amazon is going to dramatically expand its grocery delivery service.  Those of us who were around in the late '90s remember webvan, Peapod and an entire host of these that ended really badly.  However, Amazon has been able to execute extremely well those things others could never figure out.  I would not count Amazon out at all and I would never discount their ability to make this work.

Along with a massive expansion of DCs, a push into same day delivery and now Amazonfresh going nationwide (or at least expanding) I would be very careful if I were a bricks and mortar retailer.  These guys are for real and it looks like they will be a force to be reckoned with in grocery delivery.

Note:  I have written fairly extensively about the "delivery wars" including the idea of crowd sourcing for home delivery.  It is worth reading through all of this as you will see a pattern developing and a true "war" about to take place.
Posted by logisticsexpert at 8:21 PM